In August 2020, the Resonant Voices Radar analysed the resonance and reach of the following stories:

Marking the 25th anniversary of Operation Storm, with which Croatia’s military and police forces ended the war in Croatia, traditionally dominates the post-Yugoslav online space in August.

Even a quarter of a century later the wartime divisions are palpable in how the event is remembered. For ethnic Croats, Operation Storm is a monumental operation that ended the war and therefore unassailable. For ethnic Serbs in Croatia, 5 August is a day of mourning, commemorating the time Serbs were ethnically cleansed from Croatian territory.

The content of Facebook and Twitter posts around 5 August this year predictably followed these two interpretations. An analysis of tweets mentioning Operation Storm, conducted using SocioViz, shows that the most commonly used words and expressions in Twitter posts related to the term Storm were “crime,” “never forget” and “ethnic cleansing.” This indicates that this August, representatives of the Serb narrative about Operation Storm were more active on Twitter (blue network in the graphic below). This finding is supported by the fact that a list of the 10 most influential users that posted about Operation Storm predominantly consisted of Serb users, with the exception of former Croatian Prime Minister Jadranka Kosor.

What was different this year is the government of Croatia’s attempt to shift the narrative towards a more inclusive commemoration, recognising civilian victims of war, supporting reconciliation and rebuilding of trust between the communities.

The government messaging was built around the highest political representative of Serb minority attending the Operation Storm ceremony.

Boris Milošević, the current Croatian Deputy Prime Minister, took part in the official marking of the anniversary, as the first representative of Serb minority to attend this event.

Milošević’s move has led to a great deal of controversy and hostility online both internally within the Serb and Croat national communities and between the two, amply aided by polarising coverage by tabloids and alternative media in both countries. Additional tensions were created by the open condemnations that came from some official representatives of Serbia.

Both Milošević and his political party colleague Anja Šimpraga, a representative of the Independent Democratic Serb Party in the Croatian Parliament, publicly shared their personal experiences and stories of the Operation Storm, fleeing the Croatian military and police forces. Emphasising the suffering of both Croats and Serbs, they called on their colleagues to build a society of freedom and a common future together.

In the online comments, adherents of the Serbian narrative whipped up a storm of insults branding Milošević as a traitor. His actions were linked to “shooting at the Serbs killed in the 1995 refugee column”; he was called a “destroyer of Serb unity”; “not a representative of the Serbs” and a “degenerate.” For proponents of Croatian narrative, particularly on the far right, his gesture was hollow and did not atone for the crimes committed against Croatian civilian.

Others, however, celebrated him as “the bravest and smartest Serb”; his gesture “the herald of a new time,” a “step in the right direction” and “humanism in action.” 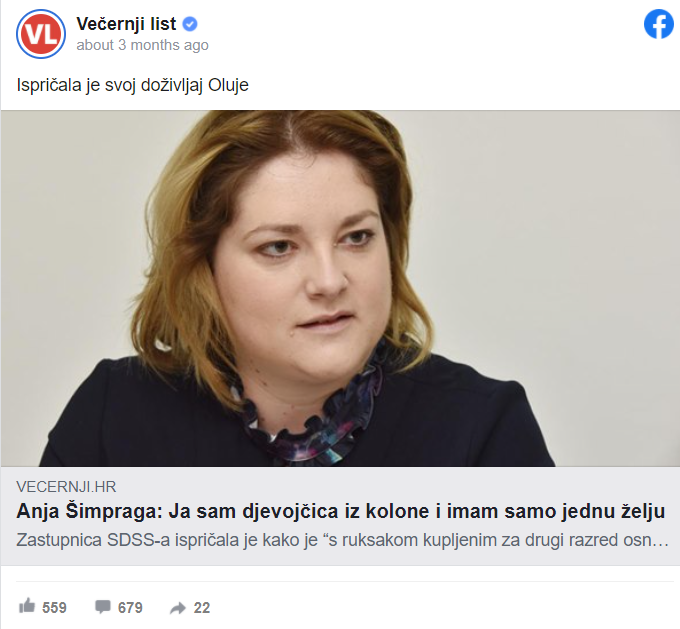 For example, just one article about this speech, published on the portal Dnevnik.hr, reached 1.25 million Facebook users, achieving about 10,000 interactions, including more than 4,500 comments. A similarly large interest and engagement of readers was prompted by an online article of Večernji list, which reached about 570,000 Facebook users, earning more than 4,600 interactions.

The hate speech is coming from inside the Slovenian government

In recent months, critics of the work of Slovenian Prime Minister Janez Janša and his government have been attacked by his Twitter army of followers, supporters and members of his party on social media. Even Janša himself does not refrain from direct verbal attacks in his Twitter posts, not only against his political opponents, but also against female journalists and members of ethnic minorities.

The online abuse targeting influential women is a trend the Resonant Voices Radar picked up earlier this year, which surged again in August, primarily targeting women who are successful and influential in public sphere with origins from the other countries that emerged from the break-up of Yugoslavia.

A quick analysis of the content of these online messages reveals that they combine misogyny, xenophobia and that their objective is ideological polarisation and mobilisation. Focusing specifically on those with non-Slovene origins and attacking their left politics, hostile comments have been systemically levelled against government opponents in Slovenia.

The targets include MEP Irena Joveva, whose parents are from North Macedonia, and who has since her election been called things like “pure-blooded socialist Balkan Čefur who is destroying our homeland.” “Čefur” is a derogatory term for a resident of Slovenia who is originally from another part of the former Yugoslavia, suggestive of superiority of Slovenians. Slovenian television presenter and actress, serving as a deputy in the National Assembly for the Slovenian Left Party, Violeta Tomić who was born in Sarajevo and prominent investigative journalist Anuška Delić are also frequently targeted, branded as “Balkan trash.” Some messages also included threats of violence.

Protests by the Belarusian opposition fueled divisions in Serbia

Opposition protests in Belarus and the poisoning of Russian opposition politician Alexei Navalny have provoked bitter divisions among social media users in Serbia, who view these events exclusively through ideological and political lenses.

In online debates in Serbia, the anti-government protests in Belarus were initially viewed through an anti-Western narrative, but without a much larger echo on social media. The exponential growth of this debate on social media occurred when EU Ambassador to Serbia, Sem Fabrizi, welcomed the fact that Serbia joined the European Union’s declaration criticising the government of Belarusian President Alexander Lukashenko, and assessing the conducted presidential elections as unfair and undemocratic.

Serb far-right activists took to social media with posts calling this decision of the Serbian authorities treacherous and characterising it as backstabbing.

The reasons for the Serbian public’s sympathy towards Lukashenko lie in the positive emotions of 1999, when at the time of the NATO bombing of the then FR Yugoslavia, the Belarusian President was the only foreign leader who visited Belgrade in support. Serb far-right groups sought to use these emotions to increase support for their own goals.

These online activists flooded the internet from their social media accounts with messages that can be divided into three groups. The first is based on anti-globalisation conspiracy theories about how Lukashenko refused to agree to the “blackmail by the World Bank, the International Monetary Fund and the World Health Organization to agree to total isolation of his citizens if he wanted a payment of (financial) COVID-19 aid.”

In the second group are messages that claim that the protests were planned and supported by the West and comparing the situation in Belarus and Lukashenko to Serbia and its former leader Slobodan Milošević, both portrayed as “victims of the West.”

Finally, the third group consists of posts that attempt to link Belarus protests to the Serb-Albanian conflict. The main piece of evidence for this narrative is a photo posted online showing the leader of Belarusian opposition Sviatlana Tsikhanouskaya with her husband and sons wearing T-shirts depicting Albanian eagles and the inscription Albania. This photo, taken during a summer vacation in Albania, was shared on social media outside of this context as proof that Lukashenko’s opponent was “married to an Albanian,” that she was “anti-Russian” and “an exponent of the West.”

Portraying Lukashenko’s opponent in the presidential elections as pro-Albanian supports the unfounded theory that the Belarusian opposition is anti-Serb and that Lukashenko is pro-Serb. The same narrative was reinforced by some Albanian media, who published this photo right next to a photo of Milošević and Lukashenko.

What is the “nationality” of the coronavirus vaccine?

Russian President Vladimir Putin’s announcement on 11 August that the Russian vaccine was ready, prompted a social media debate about which vaccine should be trusted, including in the Balkans and among the Balkan diaspora. This debate is steeped in the global phenomenon of “vaccine nationalism,” which the Director General of the World Health Organization Tedros Adhanom Ghebreyesus warned about in early August.

An analysis conducted by the RVR team of the social media content related to the SARS-CoV-2 vaccine in August, brought two key observations. The global politicisation of the coronavirus vaccine in the online discussions has generally unfolded along the lines of the East-West divide, emphasising geostrategic inclinations. Further, social media users used arguments borrowed from the (non-COVID19) anti-vaccine narrative.

Social media users in Serbia were mainly split into two groups – one which purports to only trust the Russian and possibly the Chinese vaccines, and the other which only trusts vaccines produced in the West. One of the opposition leaders in Serbia, Dragan Đilas, contributed to the politicisation of the vaccine debate when he called on the Serbian government to provide the same coronavirus vaccine for its citizens that the European Union would provide for its citizens, claiming that “Serbia’s President Aleksandar Vučić wants to vaccinate Serbia’s citizens with a Chinese vaccine.”

This move further intensified discussions on social media, focusing it on the topic of the vaccine’s “nationality” and the Cold War divisions, rather than the safety and effectiveness of the vaccine or the verification and approval procedure.

At the same time, the spread of conspiracy theories around vaccination continued on social media in August. Particularly influential was a video shared widely by Facebook pages and groups that bring together Balkan diaspora, conspiracy theorists and anti-vaccination activists.

In this video, subtitled in Serbian, which at the time of writing had 55,000 views, Dr. Andrew Kaufman, a known COVID-19 denialist, is trying to whip up fear of the new coronavirus vaccine in an interview by making false claims about existing vaccines.

The Resonant Voices Initiative in the EU is funded by the European Union’s Internal Security Fund – Police.

This website uses cookies to improve your experience while you navigate through the website. Out of these cookies, the cookies that are categorized as necessary are stored on your browser as they are essential for the working of basic functionalities of the website. We also use third-party cookies that help us analyze and understand how you use this website. These cookies will be stored in your browser only with your consent. You also have the option to opt-out of these cookies. But opting out of some of these cookies may have an effect on your browsing experience.
Necessary Always Enabled
Necessary cookies are absolutely essential for the website to function properly. This category only includes cookies that ensures basic functionalities and security features of the website. These cookies do not store any personal information.
Non-necessary
Any cookies that may not be particularly necessary for the website to function and is used specifically to collect user personal data via analytics, ads, other embedded contents are termed as non-necessary cookies. It is mandatory to procure user consent prior to running these cookies on your website.
SAVE & ACCEPT